NanoViricides (more NNVC Charts) surges on swine flu scare. NanoViricides" Flu-Cide" is a cure, not a vaccine. NanoViricides stock did quite well a few years ago during a bird-flu scare when I bought my first shares at $1.01 and took profits at $2.80. See below for long-term chart showing how it surged t0 $3.75 during the 2006 Bird Flu scare. After NNVC came back to Earth after that scare, I started accumulating shares in "Kirk Lindstrom's Investment Letter Explore" (FREE Sample Issue) and personal portfolios to load up for the next run. 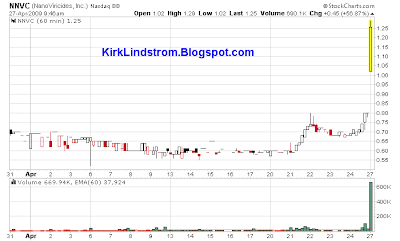 Below is today's press release from NanoViricides:

WEST HAVEN, Conn.--(BUSINESS WIRE)--NanoViricides, Inc. (OTC BB: NNVC.OB) (the "Company"), announced that it is developing FluCide(™), its flagship anti-influenza drug candidate, to work against all influenza types and subtypes. FluCide has been shown to be effective against both common influenza subtype H1N1, as well as two different variants of bird flu subtype H5N1.

The Company has previously announced excellent results in both animal studies and cell culture studies against widely different influenza subtypes and strains. If these results are confirmed in further animal and human studies, then FluCide would likely be considered the best ever drug effective against all influenzas. The Company is communicating its capabilities to various agencies involved in the current epidemic response.

The current swine flu outbreak is significant in that the H1N1 virus causing it is novel (http://www.cidrap.umn.edu/cidrap/content/influenza/panflu/news/apr2109swine.html). The US Department of Homeland Security has declared a Swine Flu Emergency yesterday. The WHO has said that the outbreak is an emergency of international concern (http://www.upi.com/Health_News/2009/04/26/DHS-declares-swine-flu-emergency/UPI-53711240725694/). The pig is known to be a transitional species for influenza viruses. That means re-assortment (i.e. mixing) of genes from bird flu, human flu, and swine flu viruses can take place in pigs. This can lead to more lethal, drug resistant novel strains to emerge from different existing ones.

"Nanoviricides(™) have clear advantages over antibodies and vaccines as antiviral strategies," said Dr. Diwan, President of NanoViricides. Antibodies are relatively specific to a particular virus strain or subtype. It is well known that HIV and influenza viruses among many others, quickly escape antibodies. Vaccines depend upon the development of antibodies by the host, and thus, cannot protect efficiently against those viruses which are continually changing their character, such as the influenza virus. Influenza vaccines in particular have to be developed with the strain that is expected to infect in the next year’s cycle. It is well known that this is not a failure-proof strategy for epidemic-causing strains that are novel.

NanoViricides, Inc. (www.nanoviricides.com) is a development stage company that is creating special purpose nanomaterials for viral therapy. The Company's novel nanoviricide™ class of drug candidates are designed to specifically attack enveloped virus particles and to dismantle them. The Company is developing drugs against a number of viral diseases including H5N1 bird flu, seasonal Influenza, HIV, EKC, Hepatitis C, Rabies, Dengue fever, and Ebola virus, among others.

For commentary and my current outlook for NNVC, read "Kirk's Investment Newsletter"

Disclaimer: I own NNVC in my personal and newsletter accounts with the last shares bought at 80¢. I have targets to take profits on these in the newsletter and my personal account should my price objective be reached. I will not announce this ahead of time here.

Posted by Kirk Lindstrom at 6:43 AM

Email ThisBlogThis!Share to TwitterShare to FacebookShare to Pinterest
Labels: NNVC