Yesterday Elaine Garzarelli gave her market outlook on Larry Kudlow's program, "The Kudlow Report." This article summarizes her key points, shows the whole video interview then lists what it would take to turn her bearish.

Elaine Garzarelli's Key points:
On what would turn her negative, she said she would short the market if FASB imposed new "mark-to-market" rules on the financials. She says that was the reason "everything happened to begin with."

Developed countries like Europe are "the next to go" since they lag the US markets in the recovery.

On Bonds, Elaine thinks we will have low inflation for a long time. Capacity utilization rate is 68%. The Fed doesn't normally tighten until it gets to 80% and they don't usually tighten until a year after a recession ends.

She thinks the S&P500 can go much higher
$73 x 17.5 = 1,278
S&P500 Charts
Best earnings will come from consumer discretionary and materials. She likes materials, aluminum, paper, infrastructure (industrial) for the next six to twelve months.

Biggest risks to the market are if:
Elaine thinks a sideways or 4 to 7% correction at any time but nothing more. 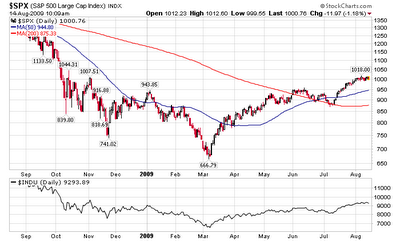 Posted by Kirk Lindstrom at 6:29 AM