Last week on November 30 we reported in "ECRI Calls for Revival of US Economic Growth" that ECRI said "with a lot of conviction, that there is a revival in growth right ahead of us."  If you have read their book, Beating the Business Cycle

, you know the WLI indicators must be persistent, pronounced and pervasive before ECRI will call for a turn in the US economy.
You can clearly see the persistent and pronounced turn in WLI and its growth rate in this chart below.  Now that ECRI made its call for a turn in the business cycle, we know that the improving economic data is PERVASIVE too.
Today's jobs report is disappointing because the 39,000 new jobs created in November is fewer than needed absorb new workers so the unemployment rate went higher.  The good news is it was a positive number.  If you add the upward revisions of 38,000 more jobs to the September and October numbers, then 72,000 more jobs were created than reported last month.
Chart of WLI and WLI growth vs GDP Growth 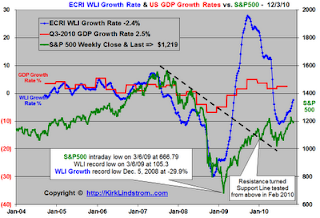 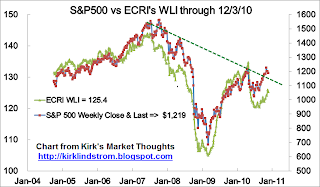 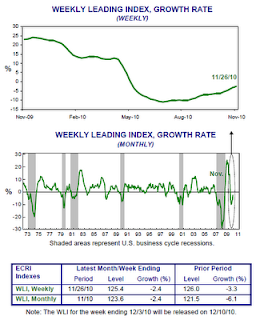 Posted by Kirk Lindstrom at 9:32 AM