FDIC List of Banks in Danger of Failure Soars

FDIC List of Problem Banks up 30%: On Tuesday, August 26, 2008 the Federal Deposit Insurance Corporation (FDIC www.fdic.gov) announced in its quarterly banking report that their list of "problem banks" (see "Problem List" below) for the second quarter of 2008 increased 30% from to 117 financial institutions. The 117 institutions on the problem list is the largest number since the middle of 2003. Total assets of institutions on the problem list increased 200% from $26 billion to $78 billion. $32 billion of this $56 gain came from IndyMac Bank, F.S.B., Pasadena, CA, which failed in July.

"By any yardstick, it was another rough quarter for bank earnings, but the results were not unexpected as the industry coped with financial market disruptions, the housing slump, worsening economic conditions and the overall downturn in the credit cycle." said FDIC Chairman Sheila C. Bair.

This decline in the banking industry is reflected in the Economic Cycle Research Institute's (ECRI) Weekly leading index which has fallen to a 28-year low, the lowest reading since June 13, 1980. 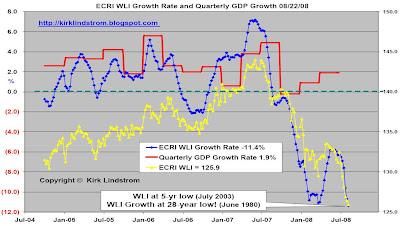 For more information, see:
Other major findings in the FDIC's latest Quarterly Banking Profile include:

Provisions for loan losses continue to be the main cause of falling earnings.

"Rising levels of troubled loans, particularly in real estate portfolios, led many institutions to increase their provisions for loan losses in the quarter. Loss provisions totaled $50.2 billion, more than four times the $11.4 billion the industry set aside in the second quarter of 2007. Almost a third of the industry's net operating revenue (net interest income plus total noninterest income) went to building up loan-loss reserves."

Noncurrent loans are up 20% to 2.04% of all loans. The number continues to rise quickly to the highest level since 1993.

"Total assets of FDIC-insured institutions declined during the quarter for the first time since 2002. The $68.6 billion (0.5 percent) decline was caused by a reduction in trading assets at a few large banks. Assets in trading accounts, which increased by $135.2 billion in the first quarter, declined by $118.9 billion (11.8 percent) in the second quarter. In addition, the industry's holdings of one- to four-family residential mortgage loans fell by $61.4 billion (2.8 percent). Real estate construction and development loans declined for the first time since 1997, falling by $5.4 billion (0.9 percent)."

"Due to a significant increase in loss reserves, including reserves for failures that have occurred since June 30th, the DIF balance fell to $45.2 billion at the end of the second quarter, down from $52.8 billion at the end of the first quarter. While insured deposits rose only 0.5 percent during the quarter, the decline in the fund balance caused the reserve ratio to fall to 1.01 percent as of June 30th from 1.19 percent one quarter earlier. Because the reserve ratio is now below 1.15 percent, the Federal Deposit Insurance Reform Act of 2005 requires the FDIC to develop a restoration plan that will raise the reserve ratio to no less than 1.15 percent within five years."

Problem List: The FDIC does not make its list of member institutions in danger of failing public because it does not want to contribute to a "run on the bank" by concerned depositors. One indication a bank may be on the list is they pay very high CD rates in an attempt to attract capital. Richard (Dick) Bove of Landenburg Thalmann has a methodology for estimating what banks are in trouble.

See Dick Bove's List of Banks In Danger of Failing

IndyMac Bankcorp was at the top of Bove's list before it failed based on non performing assets as a percentage of equity.
Graph: ECRI's WLI growth vs the DJIA
Make sure you read the attached "August 2008 Fixed Income Report" to see my graph of ECRI's WLI growth rate vs. the DJIA. You can see WLI growth started its plunge well before the stock market peaked last summer.
Posted by Kirk Lindstrom at 6:24 AM