Commenting on today's data, Lakshman Achuthan, managing director of ECRI, said "With the WLI steadily gaining ground since the summer and now hitting a 24-week high, the much-feared 'double dip' has turned out to be a mirage."
Chart of WLI and WLI growth vs GDP Growth 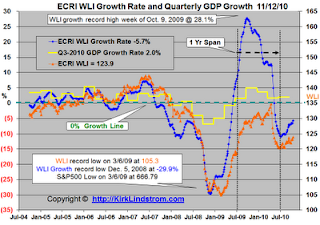 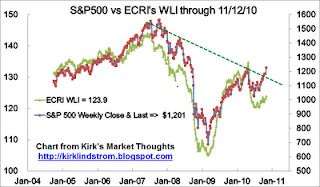 Note that the chart above of the S&P500 vs. WLI shows a breakout above the dashed green line that represents the neckline for a "Head and Shoulders Bottom" pattern.  This is a very bullish development.  A correction to test the pattern from above with a bounce to a higher high would be even more bullish, but not necessary for a continued market advance.
I took some profits in Agilent (A charts and Quote) at $36.50 earlier this morning in both my personal account and my newsletter "explore portfolio."  I am looking at putting this cash back to work should the market correct to test that neckline breakout from above.
Chart of WLI from 1973 to 2010 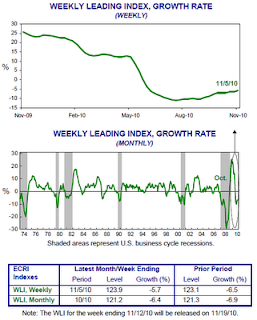 Chart courtesy of ECRI
Notes:
Disclosure:  I am long  Agilent (A charts and Quote) and the exchange traded fund for the S&P500, SPY charts and quote, in my personal account and in the "Explore Portfolio" in  "Kirk Lindstrom's Investment Letter."

Posted by Kirk Lindstrom at 9:20 AM