My charts below showing the “Investors Intelligence Survey“ or IIS and its moving averages currently say now is a good time for a market correction. On September 22, 2010 with the S&P500 (quote and charts) at 1,134 I wrote on the sentiment page of my newsletter:


"Sentiment made a lower low last month while the market made a higher low. This divergence is probably due to noise in the readings but the odds continue to favor saying the low for the S&P500 is in at 1010.91 given the quick recovery in sentiment and slowly improving economic data. It was good that many of my stocks fell into my buy zones during the latest pull-back. I added shares and now I have nice gains for the portfolio overall from those buys. The 4-week moving-average (MA) suggests the market can work significantly higher in the weeks ahead until that reading gets into my “profit taking” caution zone...."

As you can see from the first chart below, with the S&P500 now at 1211, sentiment is much better  than it was on Sept. 23.  It is also "stacking up" which often precedes a market correction.  I've taken profits and will take more profits if we go higher, but I am ready for a correction should it occur.

More about the Investors Intelligence Survey:  One of the oldest weekly sentiment indicators is the “Investors Intelligence Survey“ or IIS. A chart of the Investors’ Intelligence Survey (IIS) “Bulls over Bulls plus Bears” versus the market is a key sentiment tool for stock market technical analysis. The IIS began in January 1963 by A.W. Cohen and has been published every week ever since. Cohen was surprised to find out that the newsletter writers, just like average investors and speculators, were usually wrong at major turning points!  Cohen found the best time to go long the stock markets was not when the most advisers were bullish, but when they were bearish! Cohen’s IIS survey turned out to be a wonderful contrarian indicator! 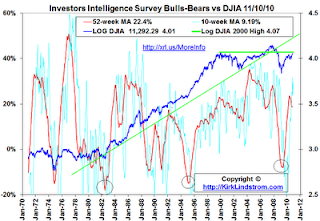 More about
Posted by Kirk Lindstrom at 9:11 AM