ECRI Calls for Revival of US Economic Growth

The Economic Cycle Research Institute, ECRI - a New York-based independent forecasting group, upgraded their projection for future economic growth. (More about ECRI)  ECRI's managing director and cofounder, Lakshman Achuthan, was on CNBC yesterday to discuss their upgrade of their Oct 28, 2010 prediction "The much-feared double-dip recession is not going to happen"  to "There will be a revival of US Economic growth in the near future."
In this interview, Achuthan says the the recovery is persistent. If you have read their book, Beating the Business Cycle

, you know the WLI indicators must be persistent, pronounced and pervasive before ECRI will call for a turn in the US economy.  The best news is once they declare an upturn, it means there is some margin for economic shocks.  The US economic recovery is not as "fragile" now as it was a few months ago when the WLI was flat.
Some key paraphrased points from the interview: 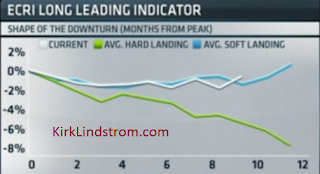