With silver prices continuing to make new highs while gold has not made a new high, the gold:silver price ratio plunged to a new low dating back to 1983!

Charts of the gold-to-silver price ratio, GLD, SLV, Gold and Silver prices plus the rest of my Seeking Alpha article at: 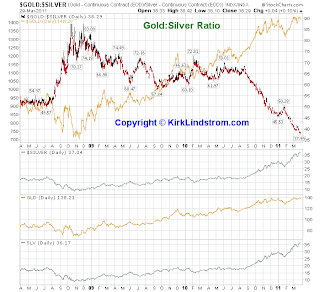 Current Holdings: Personally, I own a very small amount of gold hidden in the house for bribes if we see Armageddon. I also own silver coins for a similar purpose. For inflation protection, I own individual TIPS "treasury inflation protected securities" and Series I-Bonds. I recently sold my managed TIPS mutual funds (FINPX and VIPSX) after the recent surge in TIPS had the spread for the 5-year near record negative lows.  If the base rate for 5-year TIPS returns to a positive level, I may buy the TIPS ETF TIP rather than the managed funds I recently sold.


To best prepare for Armageddon, I own a


MSR MiniWorks EX Microfilter
I can use this to make drinking water from all the swimming pools and hot tubs near me plus the creek around the corner.  I can then trade the drinking water for food and fuel if my extra supplies in my "earthquake kit" run out.

Posted by Kirk Lindstrom at 6:03 AM No comments:

Some members of the Federal Reserve are quite worried about inflation and speaking their mind:

“The economy is looking pretty good,” Bullard said to reporters in Marseille, France, on March 26. “It is still reasonable to review QE2 in the coming meetings, especially this April meeting, and see if we want to decide to finish the program or to stop a little bit short,” he said, referring to the second round of so-called quantitative easing.
...
“If the economy is as strong as I think it is then I think it may be reasonable to send a signal to markets that we’re going to start withdrawing our stimulus, and I’d start by pulling up a little bit short on the QE2 program,” Bullard said. “We can’t be as accommodative as we are today for too long, we’ll create a lot of inflation if we do that.”

CPI is above its 2008 level so SS recipients should get a COLA this year, but like most of us who work and pay into SS, the gain will probably be eaten up completely by higher medical insurance costs.
At least most people on SS got a nice, big 5.8% raise in 2009 that they kept when CPI fell while most of the country took pay cuts or got no raises.

CPI Table by Year and Month

It ruins my day just to think how much my own medical insurance went up since that last SS COLA of 5.8%!
Posted by Kirk Lindstrom at 7:49 AM No comments:

Interest rates are starting to go up on the long end while the short term rates are terribly low. This week's survey or CD rates at the largest US banks shows BofA advertises 2.25% for a 5-year CD with Citibank paying the lowest for 5-years at 2.0%.    Historical CD Rate Graphs

Click for full size chart
Posted by Kirk Lindstrom at 1:22 PM No comments:

ECRI Global Inflation Numbers Heating Up - Fed Behind the Curve

The Economic Cycle Research Institute, ECRI - a New York-based independent forecasting group, released its latest readings for its proprietary monthly Future Inflation Gauges this morning. (More about ECRI)
Five of the seven regions covered show increasing inflationary pressure with Japan and Australia going against the global trend.
Commenting on the US report, Lakshman Achuthan, co-founder and Chief Operations Officer of ECRI, said, "With the USFIG rising to a 29-month high, underlying inflation pressures remain in a cyclical upswing."
See my exclusive article at Seeking Alpha for a full summary of today's data:
Here is a video interview on CNBC where Lakshman says the Fed has been behind the curve for a decade on inflation.
=================================================
=================================================
Then read my artilce "How to Play Expected Inflation From the TIPS Spread."  The 30-year individual TIPS I recommended in that article for purchase last month on Feb. 17, 2011 are up nearly 5% already.

"Elevated food prices could be part of the new reality, says the IMF, as it will take years for farmers to expand production enough to meet increased demand and drive down prices. "The main reasons for rising demand for food reflect structural changes in the global economy that will not be reversed," including higher demand for meat in developing countries, and increased demand for biofuels is contributing to a tightened supply."
I'm not predicting run-a-way inflation, but the Federal Reserve's preferred inflation indicator, the PCE index, went up 0.3% the last two months.  If it continues at that rate for 10 more months, annual inflation will be
My individual TIPS paying inflation plus 2.1% will then have an effective yield of 5.7% which is pretty good if you expect the Fed to keep rates low for awhile.

On February 13, 2011, Lakshman Achuthan, co-founder and Chief Operations Officer of ECRI was a guest on the national radio show "Moneytalk with Bob Brinker." During the interview with substitute hostess Lynn Jimenez, Mr Achuthan said now was the time to take risk because the economy will get better before it will get worse. He suggested listeners should "Look to take more risk now because we should boom before the next bust." and "get while the getting is good." 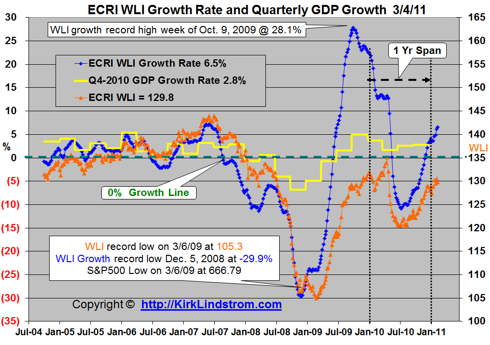 Since ECRI releases WLI numbers for the prior week and the stock market is known in real time, you can sometimes get a clue for next week's WLI from the weekly change in the stock market. Notably, in the lead-up to the last two recessions, the WLI turned down months before the stock market did.
Chart of S&P500 vs ECRI's WLI 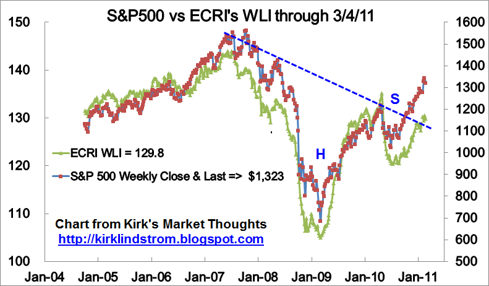 I want to point out that a correction in the stock market now would not necessarily change ECRI's call for an economic growth rate revival. It takes a "pervasive" (for the majority) change of direction of indicators in a "pronounced and persistent" way for ECRI to call for a turn in the economic cycle. These indicators and the trigger levels are proprietary. I have found no one who has duplicated them or ECRI's success in calling business cycle turns based on its reading of its indicators.
Note that the chart above of the S&P500 vs. WLI shows a breakout above the dashed blue line that represents the neckline for a "Head and Shoulders Bottom" pattern. This is a very bullish development. A correction to test the pattern from above with a bounce to a higher high would be even more bullish, but not necessary for a continued market advance.
Chart of WLI from 1973 to 2011 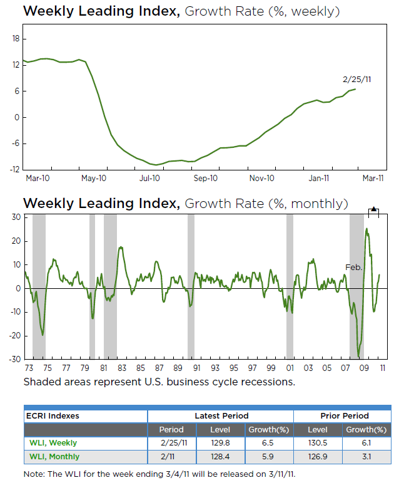 How to play ECRI's Signals: I own a lot of small cap stocks in my personal "explore portfolio" so I own SPY to get a more market weighting in this trading portfolio. If I wanted to recommend just one ETF to be long the market and take advantage of ECRI's outlook for an upturn in the business cycle, it would be the Total Stock Market Index (VTI Charts and quote), which has BOTH large and small cap stocks. I also own the total stock market index fund at Vanguard, (VTSMX) as part of my personal core portfolios. Vanguard discourages trading its index funds so VTI is the vehicle of choice for that.

Posted by Kirk Lindstrom at 12:24 PM No comments:

Fund Flow Totals by Year & 2011 through 3/2/11
This table shows a summation of the weekly fund flow data. Money Market funds yield next to nothing so people have taken money out to buy bonds as well as live on during the recession and long recovery period with high US unemployment (9.0%)


Jim Cramer was very excited about Gold.  Cramer said
Today Gold closed at $1,410.90 per ounce near its all time high. 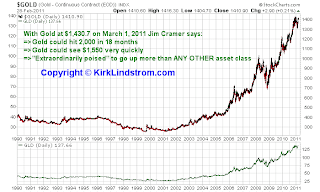 When asked what he liked for a stock pick, Jim recommended Goldcorp (GG).  Jim said he likes GG because of their low p[roduction costs and "ability to find the stuff."


Today GG closed at $49.34, slightly below its all time high 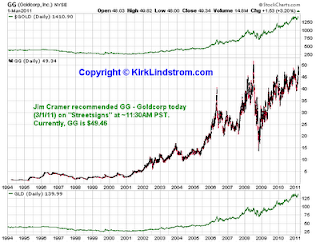 I wonder how many people will add Gold or Goldcorp to their portfolios now near all time record highs based on Jim's advice.


Questions:
Personally, I own a very small amount of gold hidden in the house for bribes if we see Armageddon, but I own "treasury inflation protected securities" (TIPS) mutual funds (like the ETF TIP or managed funds FINPX, VIPSX) and Series I-Bonds, as well as individual TIPS. I also believe it is a good time to own equities, including SPY, the exchange traded fund for the S&P500, for both inflation protection and income.


The individual 30-yr TIPS I said I was buying in "How to Play Expected Inflation From the TIPS Spread" are up about 6% in just two weeks already. I am not making any predictions for the price of Gold, but individual TIPS bought directly from the US Treasury are safe since they won't lose money if the price of gold crashes.