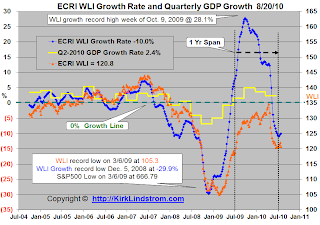 
"With the WLI staying essentially flat for the last six weeks, following a nine-week plunge, it is premature to predict a new recession, though risks remain."


Since ECRI releases their WLI numbers for the prior week and the stock market is known in real time, you can often get a clue for next week's WLI from the weekly change in the stock market.

Posted by Kirk Lindstrom at 7:58 AM