article In Striking Shift, Small Investors Flee Stock Market is a MUST READ for all readers of Kirk's Market Thoughts.   Excerpts and graph

Investors withdrew a staggering $33.12 billion from domestic stock market mutual funds in the first seven months of this year... Now many are choosing investments they deem safer, like bonds.

Bonds won't be "safe" if interest rates surge.  Bonds have been in a bull market as interest rates have fallen from the mid teens in the 1980s to record low levels today.

Until two years ago, 70 percent of the money in 401(k) accounts it tracks was invested in stock funds; that proportion fell to 49 percent by the start of 2009 as people rebalanced their portfolios toward bond investments following the financial crisis in the fall of 2008. It is now back at 57 percent, but almost all of that can be attributed to the rising price of stocks in recent years. People are still staying with bonds.

On Friday, Fidelity Investments reported that a record number of people took so-called hardship withdrawals from their retirement accounts in the second quarter. These are early withdrawals intended to pay for needs like medical expenses.

Stories on TV about this say the hardship withdrawls are often used to pay mortgages to prevent or delay foreclosures.


As investors pulled billions out of stocks, they plowed $185.31 billion into bond mutual funds in the first seven months of this year, and total bond fund investments for the year are on track to approach the record set in 2009.

Charles Biderman, chief executive of TrimTabs, a funds researcher, said it was no wonder people were putting their money in bonds given the dismal performance of equities over the past decade. The Dow Jones industrial average started the decade around 11,500 but closed on Friday at 10,213. “People have lost a lot of money over the last 10 years in the stock market, while there has been a bull market in bonds,” he said. “In the financial markets, there is one truism: flow follows performance.” 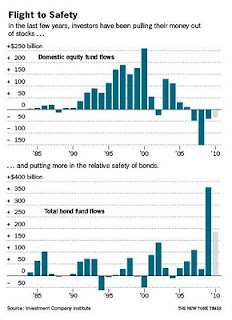 What I own:
As a contrarian, I have been adding to my equity positions during this recent market pullback.
Also, I am completely out of bonds not indexed to inflation and am considering lowering exposure to those as well.
I may add more to equities given it is so much against the crowd to own stocks these days.

In addition to equities, I am currently long TIPS, TIPS funds VIPSX (charts and quote) and FINPX (chart and quote) and Series-I Bonds (the majority have a 3.0% base rate) in my personal account.    I-Bonds will not lose net asset value if rates surge but new i-bonds currently pay very little above inflation so I have most of my cash in CDs and savings accounts paying over 1.0%.  I personally own no bonds or bond funds not indexed to inflation.   I also own a REIT fund.  REITs pay good income and should do well in a growing economy but they could suffer if we have a double dip recession.

In  both the "core" and "explore" portfolio in  "Kirk Lindstrom's Investment Letter" I sold all bonds not indexed to inflation with the majority of my fixed income (about 30% of the total) in cash and CDs.  For yield and diversification, I have a REIT fund in the "Core Portfolio" in  "Kirk Lindstrom's Investment Letter" that has done well the past two years and should continue to do well if the economy avoids a double dip recession.

For the Future:  I am strongly considering selling my TIPS funds to lock in nice gains and perhaps wait for them to pay a better spread similar to when I bought them.  The individual TIPS I bought pay inflation plus better than 1.0% so I can hold those to maturity and do very well with or without inflation.

Posted by Kirk Lindstrom at 7:36 AM

Email ThisBlogThis!Share to TwitterShare to FacebookShare to Pinterest
Labels: Commentary